CIO and CMO of Fidelity 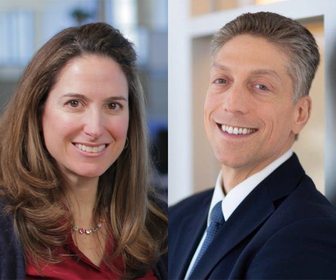 If you ask CIO Brooke Forbes and CMO David Dintenfass how their teams collaborate, you’ll get a funny look — there’s only one team working on the MarTech strategy, they say.

It’s not just lip service, either. Forbes and Dintenfass embrace an agile methodology and integrated team members. For instance, Forbes’s head of MarTech and data engineering is a direct member of Dintenfass’s marketing team and sits at his table in the office. The engineers work in agile teams hand in glove with Dintenfass’s marketing product managers.

“The quality of decisions and the speed we operate, there would be no way to pull that off without the teams being this close,” Dintenfass says. “The voice of the customer is at the table. The people using the platform daily are at the table. Where we are in the technology lifecycle, where it will be five years out is at the table. Everything is at the table at the same time.” Forbes has worked at other companies where marketing and IT ran as separate tracks. Collaboration meant communiques were thrown over the wall between the two teams. This created potential gaps in requirements and expectations.

Perhaps the greatest advantage to having one team: It ensures data integration gets addressed early in the vendor selection process. The one team meets with vendors and asks better questions about data integration, rather than marketing leading the way and reporting back to IT. This is critical because marketing is becoming data-driven, which means MarTech depends largely on its ability to tap into the data supply chain. “You can’t talk MarTech without talking data integration,” Forbes says.

Another benefit of a team collaborating daily is cross-training. Marketers gain an understanding of technology’s capabilities and shortcomings, while IT pros learn about business outcomes such as personalized messaging and orchestrated omnichannel.

Often, IT will initiate ideas about emerging MarTech.

“David has an expectation on his technology leaders to say, ‘Hey, we have new capabilities coming online, and here’s the art of the possible,’ spawning off the business strategy and ideation,” Forbes says.

Tune in to our webinar, Making MarTech Pay Off on October 7th at 10am PST on On Demand any time after that.